The DJI Mavic is here!

And it looks amazing!  Before we give you our first impressions, please watch the introduction video:

So what do you think after you watch this?

What we thought, was sort of the same feeling we had on videos about the Yuneec Breeze and the GoPro Karma.  Both it just feels like DJI might have the best product of what we are calling the “Family Drone”.  That is because it feels like a form factor and size that while definitely looking on par with the UAS’ in it’s class, this drone does not try and become more that it’s users probably want it to be.  It will not be seen on a Hollywood set, but a Hollywood movie producer might buy one to take on his family vacation to Big Sur where he can not only enjoy nature with his family but also grab some easy to get 200 feet in the air overhead shots of them riding their bikes, or just a beautiful vista of the bridge from an angle the they would otherwise not be able to get to.

For sure, it’s form factor is interesting to anyone that has an interest in going somewhere and getting some beautiful shots anywhere, it’s not, again, aimed at a bigger and better camera. It’s hoping for a smaller and as good camera and they probably will come close if not even better.  But if you are shooting a movie, you will be looking at an Inspire with an X5R or a DJI Matrice 600 with a Ronin and your DSLR of your choice with a DJI Ronin or perhaps a Yuneec Tornado with it’s mini Panasonic GH4 but what you won’t grab for that is your Mavic.

So I think defining the thing you are talking about is important when making comparisons. I have already heard discussions on forums about the Phantom 4 vs. Mavic (and the other three) but since this is a DJI product with some similar characteristics, I suppose it’s natural.  It, for sure, will cannibalize Phantom 4 sales but the people that will be going that direction are people that wanted the Phantom 4 to be smaller in the first place.  They wanted the remote to be smaller.  They weren’t buying iPad Pro’s and modding their controllers for distance or changing their lens for better optics and other things that the Family Drone fans won’t care about ever doing.   The main reason to get the Mavic, speaking completely out of school since I haven’t used one yet, in my opinion appears to be for this reason.

The controller is a perfect area to talk about the difference.  I personally know I will hate flying without my iPad Pro (9.7) but to me, it’s a great way to get the shot.  The only better thing would be a client monitor but whenever I am flying a Phantom 4, it’s for a vacation or something anyhow as if it’s for broadcast, I am honestly probably going to be using a DIY octo UAS that I have already built.  I think of myself as a professional power user and the Phantom 4 is sort of my “Family Drone” although I think the Mavic might be my new one.

We are going to do an actual in depth review when we get our hands on one but for now, we will discuss what we can see and hear: 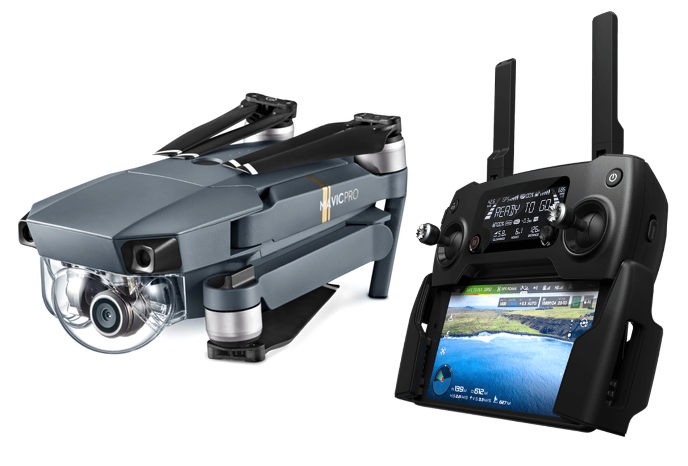 It might be hard to tell from the above image but the DJI Mavic will come in two forms.  You can buy JUST the controller (the one above has a controller with a phone inserted in it) or you can buy an even cheaper (I believe $799 version) that you must control with your phone only.  What I will be interested in finding out if flying the Mavic with your Inspire or Phantom remote is possible.  That would be smart of DJI to do that as a lot of people like ourselves here at T5D would be interested in grabbing one but $799 is probably the price point I would go to for what would be for me an extra UAS for family purposes only.  It would honestly probably retire my Phantom 4 if the visuals of it are near as good and I can use my tablet instead of the above combination with a phone.  For sure, there will be mods that will make it so it can fit a larger pad but I don’t want to fly anything in a way it was not meant to be flown.  That is sort of my stipulation with RTFs.

Watch this video from DJI on how to bind the controller for an in depth look at how this combo works:

It is our opinion that the form factor and the remote style is what makes this a completely different animal than anything in it’s class other than the other Family Drone’s, Yuneec Karma, and GoPro Breeze. We can’t wait to get our hands on all of them but we won’t lie and say that we are a little biased toward the DJI Mavic as DJI has never let us down in the end.  However, if any of the others are even close to as good as DJI products, it will be met by us excitedly.  This remote might be the thing that I don’t like about the Mavic. Obviously, I won’t be able to decide until I have it in my hand but if there is a possible deal breaker for me, it’s the remote.  I like flying with my big 9,7 inch tabled and when I fly these type of drones, I am looking for fun.  When I am flying a DLSR payload for a real film shoot, I don’t care about the remote, I want the thing that is going to get the job done best.  In this case, the other, larger remote almost can’t be a better choice for filmmaking but also might be the best for keeping everything small and compact for an easy family vacation drone.  You can see our back and forth manifesting it’s way to this blog post.

Mavic supports 4K video at 30fps. No Electronic Image Stabilization is used, ensuring all footage is 4K. They created a miniaturized,  3-axis gimbal for the Mavic, capable of stabilizing the camera even during high speed motion for smooth video and sharp photos.  It is pretty speedy too.  It won’t reach the 50mph that a Phantom 4 in sport mode can routinely hit but it says it can go a very surprising 40mph.  I always use “unfortunately” when discussion the h.264 codec on the Phantom series from the Phantom 4 to the Inspire X5. They are all disappointing that they don’t do raw or at least a production quality codec.  You can use H.264 for things like real estate and wedding videos but the codec, even if raised to a ProRes or DNxHD codec, unless you are using an X5R which shoots in Adobe DNG Raw which is an acceptable broadcast quality codec.
We assume all of the formats, resolutions and frame rates available on the Phantom 4 will be on the Mavic including 4K 3840×2160 with 24 and 25fps, UHD, 4096×2169 with 24, 25, and probably 30.  We also think the stabilization will be on par with the Phantom but probably not as good but good enough that the user it is targeting will be quite happy.  Of course these are all just guesses until we try it out.

The amazing thing is that the Mavic is only 1/6th the size of the Phantom 4 but this reduction in size doesn’t mean a reduction in flight time. The Mavic actually flies much longer than you would expect from its compact size. It is capable of reaching an absolute max flight time of 27 minutes (according to DJI who hasn’t always been exactly forthcoming but from the online stuff we’ve seen from real people, it’s hitting close) of maximum distance of 8mi (13km) due to its powerful, high efficiency motors.  While the small size is what separates it, it again depends on what you’re after when you set out to buy.  Smaller is never good for a better image or better stabilization but if you are buying and it is even close to the image of the Phantom 4 with the optic quality of the Phantom 4, then this is an amazing Family Drone with H.264 or not as it’s on board codec.  This is the thing that really makes this such a different and desired UAS.

For us here at Top Five Drones, this is the biggest news that has come out of the release of this UAS.  Lightbridge, and Lightbridge 2 which were the industry barometer for signal.  It, along with a better image is what kept DJI as by far the market leader in this class.  Companies often rest on the laurels of their success with a certain tech, DJI decided before most have even seen the improved LightBride 2, with a brand new system called OcuSync.  As anyone that reads my blogs know, I am not a fan of modding RTFs.  If I want to build something, I will build it.  I like RTFs (Read to Fly for the uninitiated) because they should work PERFECTLY as they are.  If they aren’t I won’t modify them, I will just build one to the specs I like.  When my team builds though, we are usually buying DJI products and when it comes to signal, again, you couldn’t beat LightBridge and I was looking forward to checking out Light Bridge 2 and then this which is the loudest thing about this release in my opinion.  This is the tech that will be on their UASs’ for years to come. I am beyond excited to try out their new system and therefore I am excited to try out and review the DJI Mavic.  When I do, you guys will be the first to know and I will post footage on our YouTube channel and tutorials and much more.

We are very excited for it.

Previous  All works Next